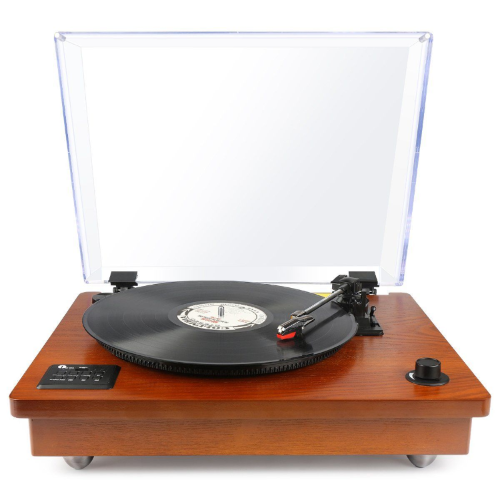 Pro’s: We love the combination of its Vintage fifties-look & feel thanks to the solid wood appearance, in combination with its versatile features. While most of the Turntables which only play Vinyl Records don’t have all the modern features, this player pushes the Vinyl options to the max!

Con’s: The needle is sufficient, but to ensure and enhance the sound quality in the long run you might want to stack up some high quality copies.

Sometimes people would say a vintage turntable record player belongs in the past. Or that it’s intended only for those select few that are still collecting vinyl records. 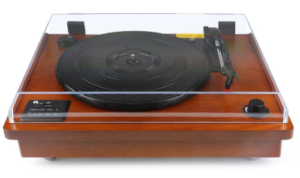 You can’t deny the one simple fact about it – nothing beats the sound quality of a good vinyl, played on a good turntable. That’s why next to the great 1byone model we’re reviewing here, we provide you with a wide choice of good affordable record players here.

In addition to that, if you’re worried about not having enough records to play just yet, don’t be – with Bluetooth sync, you can play tunes directly from your phone or tablet.

The 1byone Belt Driven Bluetooth Turntable sports an attractive design that successfully combines both retro and modern look. The main appearance of solid wood, combined with a transparent dust cover make sure that you get a real vintage feel with this product, as it looks like it was made in the ‘50s or ‘60s, while at the same time the modern look of the new features is blended in magnificently.

To give you an idea of the options, we made a brief instruction video:

The built-in stereo speakers do a great job of reproducing the distinctive sound of vinyl, as well as a number of other formats like mp3, which you can play by connecting your tablet, phone or laptop to the same speakers via Bluetooth. In addition to the nifty versatility, these speakers are made to fit any music genre you could think of, as they are providing clear and quality sound, which you can optimize for the said genres.

The usability of this turntable goes beyond that of a regular record player, as it has a sweet function of recording from vinyl to mp3, so you can get your favorite songs you have on vinyl, and take it with you on your phone or iPad. The sheer quality of this product lies in its versatility, but while that can be characterized as its main strength, that doesn’t mean that it’s lacking quality in other features and aspects.

One of the main features that, in my opinion, really stood out from the rest is the ability to record a song from vinyl to mp3. While you can find a re-mastered recording of the majority of songs out there, the ability to record your favorite song directly from your vinyl record is something that really comes in handy, and not only that but also the fact that you’re keeping the original sound is something you don’t see every day. 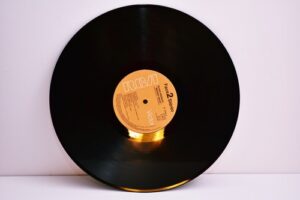 In order to successfully record a mp3 file, make sure that you place the stylus on the record before doing anything else, as you’ll end up with a blank file if you don’t do so, which is not exactly mentioned in the user manual.

Another thing about this feature I have to mention is that you can’t pause between songs, so you’ll end up with one file for one side of the record. While some may think of this as a somewhat bad thing, let’s remember the fact that most of the artists used to record whole albums, if not sides of an album, as a whole piece of art – take any Pink Floyd album as an example. The bitrate the turntable records vinyl to mp3 is 160kbps, and this can’t be changed.

The Bluetooth and plug & play feature is the one that actually got me to love this product. While I do have a fairly good record collection, with numerous artists and different genres, I have to say that it’s great to have the option of playing any song that I don’t have on vinyl by simply syncing  my phone or even my laptop by Bluetooth or a good old AUX line in port.

In addition to the aforementioned goods, there’s also an OUT port for external speakers, so you can even hook up your surround system, in order to get even more out of this amazing turntable.

The pros of this product are: 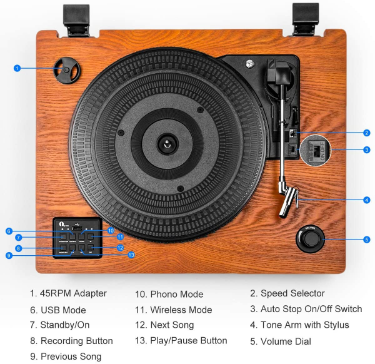 The only thing with this turntable I could categorize as a flaw is the needle, which comes off as a bit of cheap, but luckily this is the one thing you could easily upgrade – just stock up on better quality needles, and change them as soon as the old one gets used up, if not before. Other turntables have the ability to play more audio types, such as CD, Radio and Cassette. The 1byone Belt Driven Bluetooth Turntable is limited only to Vinyl Records. Yet this means all the effort on quality focus in this Record Player is put in just this medium, to give you maximum joy on your Vinyl collection.

Currently, there are over 150 customer reviews of 1byone Belt Driven Bluetooth Turntable. I have to say I noticed that even the lower ranking reviews have a positive feel to it.

The main issue most of the customers had was with the look and design of the lid cover, its color and design to be specific. While the color is something that is entirely subjective (for me, the transparent lid only makes things better – I like seeing my records spin), the design of the lid cover is actually pretty great, as it does a great job of its main purpose, protecting the turntable and the record it’s playing of any dust or other debris (pet owners like me are going to appreciate this a lot).

While the price of this turntable can be categorized as being somewhere in the middle budget range, there are a lot of “deal” offers on Amazon that can push this product to the “budget-friendly” classification. It is available in the $$ price range. Check the actual price on Amazon.com here.  In my personal opinion, and compared to the products of the same category and with similar specifications, this product gets you a really versatile record player for a real bargain price.

Whether you’re looking just for a record player or the main utility for your music, 1byone Belt Driven Bluetooth Turntable can be considered as a great fit. With the Bluetooth and plug & play features, you’re sure to get a sound system that looks vintage, but can play both modern and retro tunes with great quality.

If you’re planning to use it at a big party, the built-in speakers are maybe not going to be enough, but with the classic red/white audio out port, you can hook up this bad boy on much more powerful sound systems, playing your favorite vinyl on some modern surround systems. The recording option is sure to give you the ability to have your favorite vinyl records and tunes played on your phone, mp3 player or tablet, getting your music to anywhere you are, which is something we’re all accustomed to by now.

This versatility, combined with a smooth ‘n’ sexy retro design is something that should not be overlooked, and it’s precisely why I think this product really deserves all the praise. Last, but not least, the fact that it comes at a bargain price, alongside great customer support is something that tells me this turntable is a device you should have in your home, especially if you’re a vinyl addict as me. Good stuff, a thumbs up from here!