Techplay ODCR238WD SP record player is one of those record players that can do whatever your mind can imagine – it’s a versatile turntable that’s packed with a manifold of high-end features, including a powerful RMS output (25W + 25W), the NFC Bluetooth feature, double CD player, USB, RCA, AUX inputs and more.

The market is full with versatile record players – 3-in-1, 5-in-1, even 7-in-1 record players, but this is “the” turntable when it comes to the well-rounded performance. Even though it comes supplied with a lot of useful functions and features, it’s actually pretty easy to use. Each part is divided, and each section of this record player has a handful of buttons that serve obvious functions.

This record player features a standard height and width. Its precise dimensions are 24” by 12” by 8”, and it is considered to be “moderately light” with 18 pounds of weight. These qualities make Techplay ODCR238WD SP record player a decently compact record player.

When it comes to the issue of storage, you’ll get more room if you keep the lid closed. You could enjoy your music this way, and save up some space in the process. As for the durability, this turntable is made of wood with

several finishes, but the majority of the front side is adorned with plastic buttons/functions. 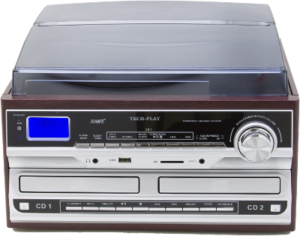 The RMS speakers are also made of wood and they’re quite durable. However, this type of material is prone to scratches, so you’d do well to avoid unnecessary repositioning. As far as the attractiveness is in question, both Techplay ODCR238WD SP record player and the RMS speakers are good to go.

The outward appearance of this music system is very appealing, but they are not exactly “beautiful”. There are a lot of record players that could easily outmatch them in this field, but they’re appealing enough to pass as “attractive”.

This is a very versatile record player that comes supplied with a manifold of features and controls. In order to avoid unnecessary confusion, we could split this section into two separate segments, the Feature Section and the Controls section:

These powerful speakers pack a punch of 25W (each). They’re made from the same material as the record player itself, and they’re decently durable. The only problem is that they’re prone to scratches. Anyhow, they provide a clear and rich full-spectrum sound output.

The manifold of inputs makes connection easy. This record player has a USB port, a Headphone input, the RCA output, several Aux inputs, and more.

The AM/FM radio is a fully digitalized feature that’s supplied with a clearly visible LCD display. Tune in to listen to your favorite radio stations easily.

The controls section is here so that you don’t have to read the user’s manual thoroughly. We’ll quickly explain what each button does so that you can enjoy your music straight away:

The features rating of Techplay ODCR238WD SP record player is 9/10.

If you want to see how good this record player performs, all you need to know is that it has a set of powerful speakers, a remote/manual method of operation, it features the Bluetooth connectivity, and it’s very reliable.

The high-performance RMS speakers have a power of 25W each. They provide a clear full-spectrum sound, and they’re probably one of the best features this record player comes outfitted with.

The NFC Bluetooth function allows you to connect your electrical devices to this record player (if they support the Bluetooth feature, that is).

You can playback your records at 33, 45 and 78 rotations per minute. Knowing that most record player models come supplied with the ability to reproduce audio at 2 selectable speeds, Techplay ODCR238WD SP record player is superior in this field.

Every single feature and function is fail-proof, but they might get “rusty” after extended usage, figuratively speaking.

The performance rating of Techplay ODCR238WD SP record player is 9/10.